Save Wayne to your Collection. Register Now! 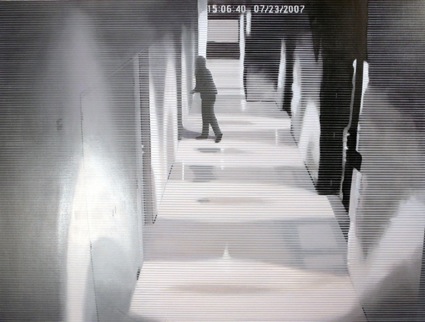 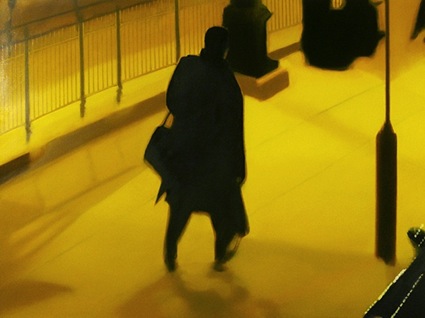 This body of work engages the twin notions of watching and being watched. I am examining images collected from the continual data stream of the expanding security environment that we move through in our daily comings and goings. The surveillance state has indeed arrived, attended by an ever more rapidly diminishing sphere of privacy.

There is a telescopic relationship to time that also informs these works. The source image is a photograph of an image on a live feed video surveillance monitor ‘ essentially a low resolution video still. The process of painting these instantaneously captured images is, on the other hand, extraordinarily slow. This generates a frisson as these two radically different conceptions of time are merged in the painted image.

I attempt to remain faithful to the bland neutrality of the captured video image as I work with it in the studio. While the process of rendering the greatly enlarged images in oil paint is keyed to this neutral opticality, there is an inexorable quality of seductive beauty in the surveillance source images themselves that becomes explicit on the painted surface. The paintings function, visually and conceptually, as screens on which the momentary appearance of people in various public spaces is recorded.

If art is a process of pointing, it must register and account for that which it is pointing toward. I have chosen to examine, at some length, images culled from actual surveillance video because I would like the viewer to register both the disintegration of privacy and the implications of surveillance technology in the current political climate.

Show all reactions
"MY REVIEWpic a; moderation of light and dark through the shades of human imagination to make elaborate the path to a given destination.pic b; defining concept through a journey to prospect."
"These are absolutely incredible! I love both of them. Brilliant"
"These pictures make me feel like I'm watching rats in a maze. Very claustrophobic in the human boundaries surrounding your subjects emphasizes loss of privacy brilliantly."
"I can't believe that these are paintings! at first when I looked at them I thought they were just pictures but wow! unbelievable stuff!"
"Those aren't photographs or still images, Seth, and to others who are confused. The two images shown here are oil paintings. Now look at it and tell me its not art. I'd say that's some pretty darn amazing art."
"I don't know how much skill is actually going into this. I mean, none of these are his pictures that he's taken. They're all from security cameras. Otherwise, I think it's a pretty interesting idea. It just seems kind of unfair to call this person an artist. Maybe a thinker... But an artist? I don't know..."
"while i dont currently have a website....i am an artist...and i appreciate the detail of your work...ive done similar works. thank you fou your work displayed here. you have a very distinctive "eye""
"Great work! Check out his website it has some different processes. I have lived in Poughkeepsie my whole life and having artistaday as my homepage, this is my first encounter with his work"
"I love the bottom one. Amazing concept, beautiful exicution."
"Amazingly well done. love it." 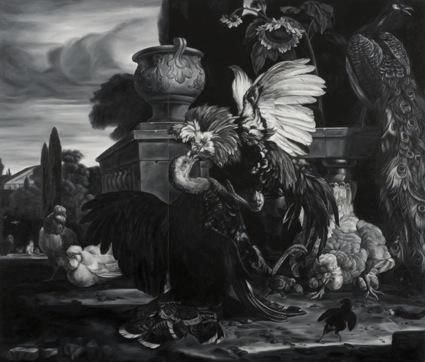 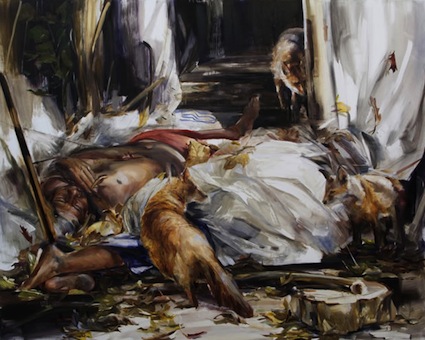